Good morning. It’s Tuesday. Gov. Kathy Hochul will deliver her State of the State address today. We’ll get a preview of her billion-dollar plan to deal with health care shortcomings for people with mental illness. We’ll also look at the issues in the nurses’ strike at two New York City hospitals. 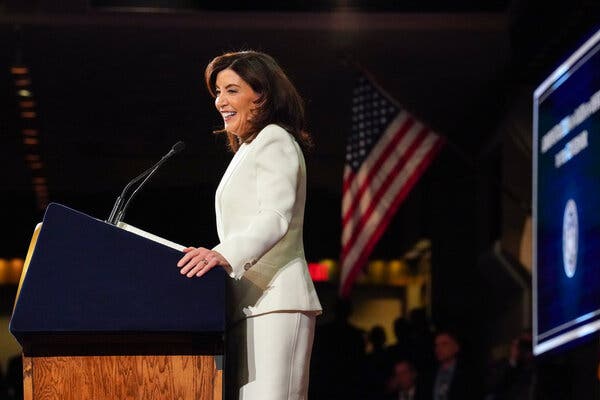 What will the governor say?

No matter who is governor, that’s always the question in Albany on the day of the State of the State address. That day is today.

Some longtime Albany watchers say there is a formula to State of the State speeches, even for governors like Hochul, who have been in office for a relatively short time. It’s been 504 days since she succeeded Andrew Cuomo. That’s a fraction of the 7,500-plus days that the state’s longest-serving governor, George Clinton, put in between 1777 and 1804, with a six-year timeout from 1795 to 1801. But enough history.

Longtime Albany watchers say the State of the State usually follows a time-tested formula. Most years, said Blair Horner, the executive director of the New York Public Interest Research Group, “a lot of the speech is largely self-congratulatory for the governor and the lawmakers. There’s usually a portion that has interesting regional implications as a way to get The Buffalo News to write about something in Buffalo or The Rochester Democrat and Chronicle to write about something in Rochester.”

Also, he said, the speeches are “usually short on details and the bad news doesn’t show up until the budget” — which will follow in a few weeks. “The M.T.A.’s cratering finances, there probably won’t be much mentioned about that,” he said, referring to the Metropolitan Transportation Authority, the state agency that runs the subways and buses in New York City as well as the Long Island Rail Road and the Metro-North Railroad.

What to Listen For

Hochul indicated in her inauguration speech on New Year’s Day that public safety and housing affordability would be her top two issues as she tries to address the wave of discontent that carried her Republican challenger, Lee Zeldin, to within 6½ percentage points of defeating her in November.

Democrats in Albany — who hold veto-proof supermajorities in the Assembly and the State Senate — will listen for hints that Hochul, a moderate, is open to policy concessions to progressives. It remains to be seen whether she will seek changes to the state’s bail laws, which progressives might oppose.

Another question is whether she will mention the fight over her nomination of Hector LaSalle to be the state’s chief judge. At least a dozen state senators have already said they would vote against his confirmation.

Part of her address will focus on an ambitious billion-dollar plan to close some of the many gaps in the health care system for New Yorkers with mental illness.

She is expected to call for drastic changes, including compelling private hospitals to reopen more than 800 inpatient psychiatric beds; creating 3,500 units of housing with service supports; and expanding mental health services in schools, which have seen steep increases in children with psychological problems. Her plan would also expand insurance coverage for mental health services, including treatment for school-age children.

She will also call for hospitals to follow stricter standards for evaluating and admitting patients with serious mental illness. And her plan would create more teams of outpatient care coordinators so those patients don’t fall through the cracks.

To help people with moderate mental illnesses like depression — who may have trouble accessing care — she will seek to triple the capacity of community behavioral centers that provide walk-in services, to 188,000 patients, from 68,000. Some 19 new sites would be set up in New York and 11 more in other parts of the state.

Hochul’s coordinated approach is “the best prescription a doctor can write,” said Joy Rudin, the chief executive of the Institute for Community Living, a nonprofit that provides services and housing to people with serious mental illnesses. She called Hochul’s plan “transformational.”

Several elements of the governor’s plan are among the items that Mayor Eric Adams asked for in November when he announced his own policy to help people with severe, untreated mental illness, by force if necessary. Adams said he wanted the state to require hospitals to consider patients’ long-term history and their ability to adhere to outpatient treatment when deciding how long to hold them. He also called for better coordination between hospitals and community caregivers.

Enjoy a mostly sunny day near the mid-40s. The evening is partly cloudy, with temps around the low 30s.

Nurses go on strike at 2 hospitals

Nurses at eight other private city hospitals had reached deals on tentative contracts and did not walk out.

Some nurses on the picket line at Mount Sinai — who saw how valued they were when the coronavirus pandemic hit in 2020 and who struggled with exhaustion and burnout — said they wanted better conditions for themselves and their patients.

Lorena Vivas, a nurse at Mount Sinai for 19 years, said she had often been assigned to care for three or four patients at a time in intensive care, instead of the one or two she is supposed to look after. “This has been going on even before the pandemic,” she added, “and the pandemic just blew the whole thing open.”

Picketing Montefiore nurses described overcrowded, understaffed conditions. The union said patients at Montefiore are kept in hallways so often that management has installed televisions there.

Hospital officials have said they are doing what they can, given the national nursing shortage. A spokeswoman for Mount Sinai said the hospital had pursued “unprecedented recruitment strategies” in recent years.

As it became clear this week that a strike was likely, Mount Sinai and Montefiore rushed to bring in temporary staff, even pressing doctors into service to fill nursing gaps. Montefiore said in a statement on Monday that union leaders had “decided to walk away from the bedsides of their patients” despite an offer of a 19.1 percent compounded wage increase over three years and a promise to create more than 170 new nursing positions.

I was born and raised in New York City. I attended my first Broadway show while I was still in the womb (“Fiddler on the Roof,” starring Zero Mostel.) I saw my first movie at Radio City Music Hall (“Bedknobs and Broomsticks.”)

There is 8-millimeter footage of me toddling around the Central Park children’s zoo, and photos of me as a teenager at the top of the Twin Towers. I knew which deli had the best corned beef on rye, and where to get the best dim sum in Chinatown.

I loved everything about growing up in New York: the clackety-clack of the wooden escalators at Macy’s; the clink of a token being dropped into a subway turnstile.

When I was 15, I got my working papers at the State Department of Labor; at 23, I got a marriage license at City Hall.

In my mid-20s, I moved away, but I visited as often as possible. Once, while waiting to cross 42nd Street at Fifth Avenue, I found myself looking up and marveling at the Beaux-Arts architecture of the New York Public Library’s main branch.

Unaware that the light had changed, I felt someone push past me hastily.

Glad we could get together here. See you tomorrow. — J.B.

P.S. Here’s today’s Mini Crossword and Spelling Bee. You can find all our puzzles here.

Tags
New Said She That With

In Big Sur, Living With Nature’s Beauty but Trapped by Its Fury

Look! Up in the Sky! It’s a … Chinese Spy Balloon?