Iran on Saturday hanged two men, a 22-year-old national karate champion and a 39-year-old poultry worker, who participated in antigovernment demonstrations and whose executions were condemned as a ploy by the government to use violence and sow fear to crush the protests.

The men, Mohammad Mehdi Karami, the karate champion, and Sayed Mohammad Hosseini, the factory worker, were hanged at dawn on Saturday in the city of Karaj near the capital, Tehran, after hasty trials on charges that they participated in the killing of a member of the Basij paramilitary group in November, according to the judiciary.

Iran has deployed heavy-handed violence against protesters since mid-September, when the death of 22-year-old Mahsa Amini in the custody of the morality police sparked a nationwide uprising to demand an end to theocratic rule in Iran. Rights groups say at least 500 people have been killed by security forces, including 50 children, and the United Nations says at least 14,000 have been arrested.

At least 13 of the detained protesters have been sentenced to death, among them a doctor, a bodybuilding champion, a rapper and a barber, with their charges ranging from burning a trash can to allegations of killing security forces, according to Amnesty International. Two men were executed in December, one of them was hanged in public from a crane with a sack over his head.

The trial for Mr. Karami and Mr. Hosseini, held in Iran’s Revolutionary Court, lasted less than a week and relied on forced confessions and shoddy evidence, according to Amnesty International.

The men were denied lawyers of their choice and were represented by attorneys appointed by the government, according to Mr. Karami’s family and rights groups. Both men had denied the allegations against them.

The Protests in Iran

Since September, Iran has been embroiled in demonstrations prompted by the death of a young woman, Mahsa Amini, while she was in police custody.

The executions shocked Iranians who had been campaigning and protesting against the execution of protesters and drew widespread condemnation from the United States, France and the United Kingdom.

“Appalled by the regime’s execution of two more young Iranians after sham trials,” Robert Malley, the U.S. special envoy for Iran, said in a tweet. “These executions must stop. We and others across the globe will continue to hold Iran’s leadership accountable.”

Four protesters have now been executed and least 15 others are at risk of receiving death sentences because they have been charged with capital offenses, rights groups said.

“The Islamic Republic has demonstrated yet again that it has no policy but reliance on maximum violence to address ongoing and growing opposition to its rule,” said Hadi Ghaemi, the director of the New York-based Center for Human Rights in Iran.

On Thursday, Iran arrested Mehdi Beik, the political editor of the Etemad newspaper, whose interviews with families of those on death row, including Mr. Karami’s father, have gained national attention.

In an audio interview posted online, the senior Mr. Karami said he is a street vendor who sells napkins and had invested his life savings to help his son realize his athletic dreams.

Mr. Karami’s parents had camped outside the prison where they had heard their son might be executed and had begged prison officials for a last visit but were denied, according to Iranian news reports.

A photo of Mr. Karami, who is Kurdish, circulated on social media showing a tattoo of the Olympic rings on his muscular arms. His family said he dreamed of making it to the Olympics one day, and the tattoo was for inspiration.

A video from Saturday shows his grave covered in a traditional termeh textile, typically used for weddings, and white flowers. A woman said to be his mother is heard sobbing and wailing and saying his name.

Before Saturday’s executions, the lawyer for Mr. Hosseini, Ali Sharifzadeh Zakani, tweetedthat he had filed an appeal on Wednesday and was told by the authorities to come back on Saturday to register the appeal.

He said he was on his way to the court when he heard his client had been hanged. “Why so much hurry? You could have at least allowed one more review of the case,” he said in a tweet. He had said earlier that Mr. Hosseini had been severely tortured in detention.

Mr. Hosseini’s parents are both dead, and according to Iranian news media reports, no family members have yet claimed his body. In his trial, he had said he was on his way to the cemetery to visit his parents’ graves when was caught in protest traffic and the clashes that resulted in the death of the Basij member.

In a public outpouring of grief for both men on social media, many Iranians said they would mourn for Mr. Hossini in the absence of his family. Azar Mahisefat, a social media influencer and home cook who has half a million followers on Instagram, wrote, “My son, tonight I cried for as the mother you did not have.”

Hamideh Abbasali, an Olympian and the captain of Iran’s national women’s karate team, condemned the executions. On Instagram, she wrote about Mr. Karami, “This kid did not deserve to be denied the right to live the rest of his life,” and added that “Injustice will not last forever.”

On Saturday night, protests broke out in several neighborhoods in Tehran, videos posted on social media showed, with crowds chanting, “For every person killed, there are a thousand others behind him.”

Tags
Had Iran Said That Was

Look! Up in the Sky! It’s a … Chinese Spy Balloon? 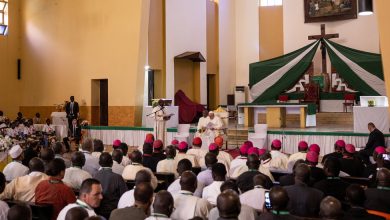