Good morning. It’s Thursday. Let’s go exploring beneath a celebrated Manhattan cathedral to find out why it didn’t soar as high as originally planned. 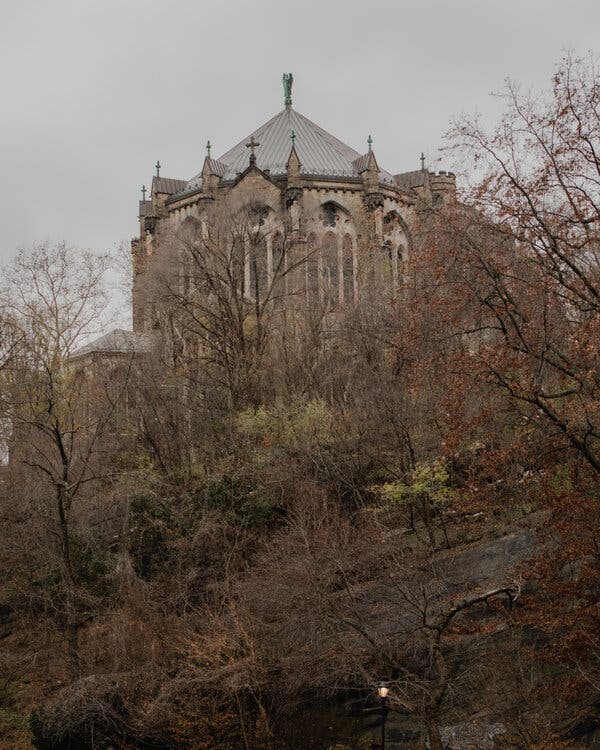 Manhattan has been remade with stone and steel, but factors that are not man-made often dictate what architects and engineers can design and construction crews can build. That was the case with the Cathedral Church of St. John the Divine, as my colleague William J. Broad discovered after he and his wife went on a tour. A tour guide mentioned that there was deep water in the subbasement.

That got his attention and led to months of research and interviews — and more tours, this time to places beneath the cathedral that most people never see.

I asked him to tell us what’s down there and how it affected the size and shape of the cathedral, which is one of the world’s largest as well as the principal church of the Episcopal Diocese of New York.

You wrote that the Cathedral Church of St. John the Divine is one of the great could-have-beens. How so?

Its planners saw it as setting new standards for ecclesiastical size and splendor, not only in Manhattan but the world. Its massive central tower was to have soared to a height of more than 40 stories, dwarfing the day’s skyscrapers.

But the chosen ground for the giant cathedral turned out to be honeycombed with springs and decomposing rock. That surprise did in plans for the colossal tower and began what in time became known, jokingly, as St. John the Unfinished.

So this is really a story of geology and hydrology, but it seems counterintuitive to a non-geologist like me. Manhattan has so many skyscrapers. I always figured there was solid, impermeable bedrock down below. What’s under the cathedral?

“Bedrock” is a misleading word because it conjures up a flat surface. In Manhattan, it tilts at a variety of angles and its topmost surface goes down as far as hundreds of feet, which can inhibit the construction of skyscrapers. In many places the bedrock is so highly fractured that groundwater readily flows through it. A book I read, “Hidden Waters of New York City,” tells how subterranean springs and streams upended many early buildings in Manhattan.

Today, spelunkers look for remnants. I talked to one who found a lost river — Nick Carr, who runs the website scoutingny.com. “These things kind of linger, even after they’re cemented over,” he told me.

Early in 1893, when St. John’s builders started digging at their Morningside Heights property, they expected solid rock but instead found springs, decomposing rock, sand, clay and loose boulders. At one spot, they had to burrow down 135 feet to find solid bedrock.

In contrast, the builders of St. Patrick’s Cathedral on Fifth Avenue got lucky. They hit bedrock right away. That’s why that Catholic church has twin soaring towers and came to be ringed by skyscrapers.

St. John’s officials took you to the crypt and, below that, to a deeper vault where lingering flows of water can still be found. One official who led the way has worked at the cathedral for years and told you she’d never been into depths before. Were you wearing waders?

I was surprised at how many St. John’s officials talked about the waters but had never visited the cathedral’s depths. Maybe it was superstition. After all, the deep vault lies below the crypt, which holds the tombs of bishops. One staffer said it held a river, another, a creek.

I wasn’t sure what to expect and had no time to prepare for our scouting party. We had no flashlights, no boots, no waders.

It was quite suspenseful and a little bit spooky at times. A second visit under higher illumination was more revealing. Signs of past flooding were plentiful. But at present the waters beneath the cathedral are less of a threat than a curiosity.

Couldn’t the people who planned the cathedral in the late 19th century have known the site was waterlogged? And couldn’t they have done something to compensate?

An 1865 map of Manhattan shows three small rivers arising within a block or so of what became the cathedral’s property.

Egbert Viele, a graduate of the Military Academy and a Civil War veteran who made the 1865 map, became a public voice of caution on the dangers of building atop the old springs and riverbeds. In 1892, the year St. John’s cornerstone was laid, The New York Times quoted him as warning that subterranean water “is constantly bubbling out of the rocks on which the city is built.”

Andrew Dolkart, a Columbia professor who wrote an architectural history of Morningside Heights, told me that such observations should have put St. John’s planners on alert. “The map was good enough to know there was a problem,” he said. “It was due diligence. They should have known what was there before building one of the biggest buildings in the world.”

Other experts disagreed. Sergey Kadinsky, author of “Hidden Waters of New York City,” told me the selected plot of land offered no discernible warning signs. “If it had been a valley,” he said, evoking a subterranean riverbed, “the possibility of underground water would have been obvious.”

Janet Adams Strong, an architectural historian who wrote her doctoral thesis on the Episcopal cathedral, told me that modern knowledge probably would have helped. But geology and hydrology, she added, “weren’t sciences back then.”

Once builders realized the extent to which the chosen ground was waterlogged and its bedrock eroded, they took drastic measures. In 1896, The Times reported that they strengthened the site with 351,000 cubic feet of concrete, giving the cathedral “the equivalent of two solid rock foundations.”

J. Pierpont Morgan, founder of the nation’s largest bank, gave the cathedral $500,000 — or more than $17 million in today’s dollars — to help cover the costs. Even so, in the end, the reinforcement of the cathedral’s site was seen as insufficient to support what was to have been the church’s most prominent feature. The gargantuan tower was relegated to the scrap heap of history.

What about the apartment building that was erected some years ago on the cathedral’s north side? Did it affect the flooding beneath the crypt?

The Enclave at the Cathedral — a 430-unit rental complex that runs the length of West 113th Street between Amsterdam Avenue and Morningside Drive — was built from 2014 to 2016. Jim Patterson, the cathedral’s head of facilities, said its foundation became a subterranean barrier that diverted most of the underground flow away from the cathedral. “They solved our problem,” he told me.

But when Patterson took me on my second visit to the underground vault, it became clear that there was plenty of water still around, including flows into a large gathering pit. Truth be told, he said as we roamed the muddy vault, “we really don’t know where all this water is coming from.”

It will be mostly cloudy, with temperatures in the low 50s. At night, expect a chance of showers late, with temps approaching the low 40s.

It was Opening Day at Yankee Stadium in April 1971, and a large crowd was on hand to see the Bronx Bombers start a new season.

My aunt had gotten us seats near the section where the players’ families sat, and our view of the field was superb.

As fans began to trickle out of the stadium in the later innings, I noticed that some of them were approaching a man who was sitting a few rows in front of us, and he was kindly accommodating everyone who asked him for his autograph.

I couldn’t tell who the man was from a distance. So, with my curiosity getting the better of me, I ambled down to where he was sitting and held out my pencil and scorecard.

After he finished signing, I looked down and was delighted to see that I had just gotten George Plimpton’s autograph.

Glad we could get together here. See you tomorrow. — J.B.

P.S. Here’s today’s Mini Crossword and Spelling Bee. You can find all our puzzles here.

Melissa Guerrero and Ed Shanahan contributed to New York Today. You can reach the team at nytoday@nytimes.com.

Tags
That Was Water What With

Does a Newly Elected G.O.P. Assemblyman Really Live in Brooklyn?