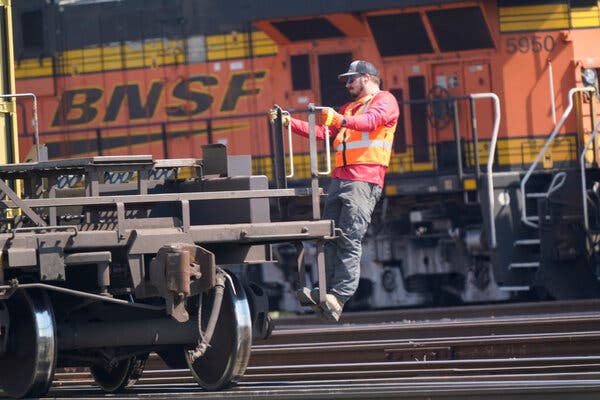 With less than 24 hours left, Labor Secretary Marty Walsh tweeted at 5:08 a.m. Eastern that a crisis had been avoided. “Our rail system is integral to our supply chain, and a disruption would have had catastrophic impacts on industries, travelers and families across the country,” he said.

Rail unions had been negotiating for more pay, sick leave and safer working conditions; their members must still approve the deal.

The White House feared disaster if a strike went ahead tomorrow, further snarling America’s already-battered supply chain and potentially exacerbating inflation. A railroad trade group warned that a work stoppage could have cost as much as $2 billion a day.

Preparations for a strike were well underway. Companies had scrambled to find alternative transportation for goods and components, though trucks and airplanes could handle only a fraction of rail freight. Amtrak, which uses some of the same tracks as freight shippers, had announced yesterday that it would cancel all long-distance service starting today.

Even Warren Buffett was drawn into the fray. Tax justice advocates and Senator Bernie Sanders, independent of Vermont, criticized the billionaire — whose Berkshire Hathaway owns BNSF, the giant freight railway operator — for not doing more to avert a strike. At least some union officials had blamed BNSF for holding up talks.

“Billionaire railroad owners like Buffett extract their personal wealth directly from the exploitation of other human beings,” said Erica Payne, the president of the advocacy group Patriotic Millionaires. (The Washington Post reported that Greg Abel, one of Buffett’s top lieutenants, had been in talks with the administration.)

California sues Amazon over antitrust claims. The lawsuit by the state’s attorney general argues that Amazon unfairly stifles competition by penalizing merchants who sell goods for less on other platforms. A similar case filed by the District of Columbia was thrown out.

Shell’s C.E.O. will step down at year end. Ben van Beurden will leave after nearly a decade leading the oil giant. His tenure included pledging to reduce the company’s carbon footprint and moving its headquarters to London. He’ll be replaced by Wael Sawan, the company’s head of gas and renewables.

Nancy Pelosi promises a vote on investing rules for Congress. The House speaker said she would bring legislation meant to curb trading by lawmakers to the House floor this month. The announcement comes a day after The Times reported that nearly 100 lawmakers had reported trades that posed potential conflicts of interest.

Britain reportedly considers removing limits on bankers’ bonuses. The country’s new finance minister, Kwasi Kwarteng, argues that the move — made possible by Brexit — would make London a more competitive financial hub, according to The Financial Times. It’s part of Kwarteng’s bid to raise economic growth, though critics say his targets are unrealistic.

A new path for corporate justice

When the Justice Department considers bringing a case against a corporate executive or a business, it will take into account a big question: Is the company a good actor? That is, does it enforce a policy to claw back dubious gains? And does it cooperate with the authorities and turn in wrongdoers? That’s the crux of a major update to the agency’s criminal enforcement policy that will be announced today.

“I wanted very much to arm and empower chief compliance officers and general counsel to be able to go into the boardrooms and say to the C.E.O., to the chair of the board, ‘We need to make these investments in compliance,’” Lisa Monaco, the deputy attorney general, told DealBook in an exclusive preview. “When I was out of government, I sat on some corporate boards and I saw that those are hard decisions and you have hard trade-off discussions.”

Corporate criminal enforcement gets an overhaul. Last October, Monaco announced a coming crackdown on companies, with a key plank: trying to motivate more people, whether through the promise of leniency or other benefits, to come forward. She reasoned that securing more voluntary disclosures would ultimately improve the department’s record in corporate criminal enforcement. She appointed an advisory board to help usher in the changes, which got feedback from academics, consumer activists, lawyers, executives and compliance officers.

Confessing comes with benefits. By the end of the year,every division at the department must write a policy that makes clear to businesses how they can win reduced fines and penalties for voluntary admissions of misconduct. To get credit for cooperation, companies must demonstrate that they’re willing to cooperate with the authorities — even being willing to name individuals involved in suspected wrongdoing — show how they are linking compensation to compliance, and act fast to claw back compensation or perks given to bad actors.

Repeat offenders beware. Businesses will be treated more like individuals in the justice system, with prosecutors required to consider past behavior in reaching settlements and sentencing. Recidivists will face a higher price for failing to reform, Monaco said.

“Hopefully this will influence a new form of capitalism,” said Yvon Chouinard, Patagonia’s founder.Credit…Natalie Behring for The New York Times

Yvon Chouinard is donating his entire company to fight climate change. The rock-climbing entrepreneur and his family have transferred their ownership of Patagonia, the outdoor clothing and gear company valued at about $3 billion, to a specially designed trust and a nonprofit organization.

“I was in Forbes magazine listed as a billionaire, which really, really pissed me off,” Chouinard, 83, told The Times’s David Gelles, who was the first to report the news. That was the impetus for Chouinard’s novel succession-turned-giveaway plan.

Patagonia’s voting stock is now held by the Patagonia Purpose Trust,which will be run by the Chouinard family and their advisers.Its common shares are owned by the newly formed Holdfast Collective, which will receive all of Patagonia’s profit — roughly $100 million a year. It is tasked with spending that money to limit the planet-damaging effects of climate change, and to protect undeveloped land around the globe.

“One option was to sell Patagonia and donate all the money,” Chouinard wrote in a public letter. “But we couldn’t be sure a new owner would maintain our values or keep our team of people around the world employed. Another path was to take the company public. What a disaster that would have been. Even public companies with good intentions are under too much pressure to create short-term gain at the expense of long-term vitality and responsibility. Truth be told, there were no good options available. So, we created our own.”

Similar donations are happening across the political spectrum. Last month, The Times reported that Barry Seid, an electronics manufacturing mogul, had donated his $1.6 billion electronics company to an organization that pursues conservative causes, including efforts to stop action on climate change. That gift was structured in a way that resulted in a huge tax windfall.

Chouinard isn’t getting a tax break, paying about $17.5 million in taxes on the gift of shares to the trust. “Hopefully this will influence a new form of capitalism that doesn’t end up with a few rich people and a bunch of poor people,” he said.

“We’re in a worse place than I expected.”

— Bill Gates, in an interview with Times Opinion on how the world is faring on 17 benchmarks of human progress established by the United Nations in 2015.

After years of planning, debate and delay, the Merge arrived more or less as scheduled this morning — at 2:45 a.m. Eastern. Crypto enthusiasts say this upgrade to the Ethereum blockchain will make the Ethereum platform less environmentally damaging and more secure against hacks, and thus more appealing to a new generation of users and investors. Critics counter that the Merge could result in a few big players controlling an ostensibly decentralized, highly valuable asset. Here’s what you need to know.

What is changing? Ether, the second-most popular crypto token after Bitcoin, is Ethereum’s native token. Until now, Ether was minted via a proof-of-work method: Miners used powerful computers to continually solve math puzzles competing to make a new block on the blockchain and earn some crypto in exchange for the service. That whole process is going away for something called proof-of-stake, which requires far less computational firepower. Under the new model, participants will deposit, or stake, some of their digital tokens as a kind of collateral for the chance to mint new blocks.

Who stands to gain from the Merge? Ethereum developers say the move from proof of work to proof of stake will reduce power consumption across the network by 99.95 percent. The hype surrounding a greener coin could attract the interest of more portfolio managers. “This improvement in environmental outcomes will likely open the door for institutional E.S.G. investors to invest in Ethereum,” the Deutsche Bank analyst Marion Laboure wrote in a client note this week.

What could go wrong? Developers say there are few technical risks for investors, though warnings abound that hitches could disrupt the software upgrade. And scammers are circling. Suspicious Twitter accounts impersonating the Ethereum co-founder Vitalik Buterin are proliferating, aiming to dupe crypto holders with false promises of Ether giveaways. On the legal front, some lawyers say that staking could change how regulators define Ether. The token is considered a commodity now, but the staking process brings it closer to the classic definition of a security, these legal experts argue, as outlined in a 1946 Supreme Court test.

The Merge is just the beginning. There are four more upgrades culminating in “the Surge,” all supposed to make the system scalable, speedy and less expensive to run, Buterin has said. Investors are still in wait-and-see mode. Ether was trading about 1 percent higher this morning.

Best of the rest

Thanks for reading! We’ll see you tomorrow.

We’d like your feedback. Please email thoughts and suggestions to dealbook@nytimes.com.

We’d like your feedback! Please email thoughts and suggestions to dealbook@nytimes.com.

‘The Future of Hospitals’: Flexible Space for the Next Pandemic